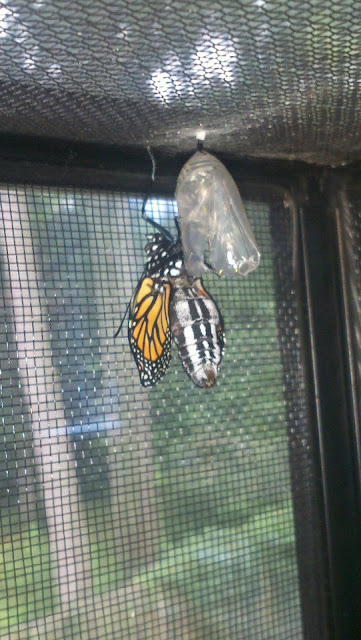 I was so happy to have another healthy butterfly, but admittedly I was a bit sad, too. I had expected Rick and Charlie to emerge at almost the same time (given their past), but Charlie's chrysalis was still quite green and had at least another day to go.

I waited for Rick James' wings to unfold fully, and even though he wasn't flapping around with the same anxious flutter as Eddie Murphy, I figured I had better get him outside so he could start eating right away. I kept him fed as a caterpillar- and certainly didn't want to starve him as a butterfly! 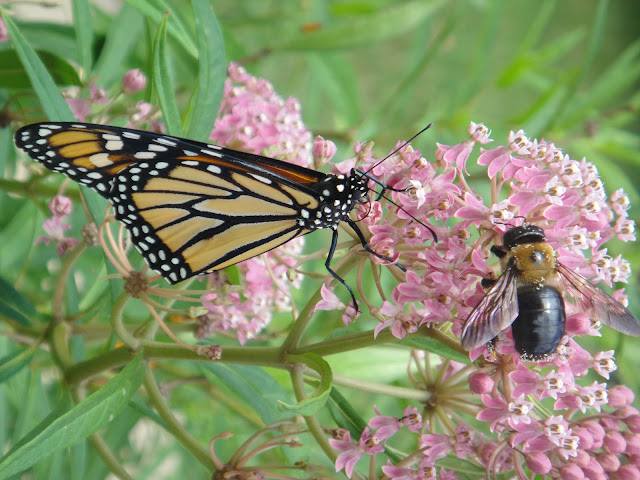 Besides making friends with this bee, Rick James didn't... do much. He had a double-proboscis going, which worried me a little, until I read that that's normal until the two tubes fuse together.

It was a nice, sunny day, so I left him to feed on the milkweed and figured I'd come back and check on him later.

About half an hour passed, and he was still there, in the same place.

I waited another hour- same thing.

He stayed on the plant for about 4 hours, and it started looking stormy outside... so back in he came.
I set up some flowers in a vase, hoping if he needed to eat, they would suffice.

It occurred to me that maybe... possibly?... could he be waiting for Charlie Murphy?

He spent the rest of the night in the screened cage hanging on one of the walls. Not flying around. Not even so much as attempting to fly around.

This morning, Charlie Murphy's chrysalis was very, very transparent. I knew he would be coming out today!
Rick James was still just sitting there, hanging on the wall.

After a trip down to Maryland and into the office for work, I returned home and when I went upstairs, I heard the sound of wings flapping! 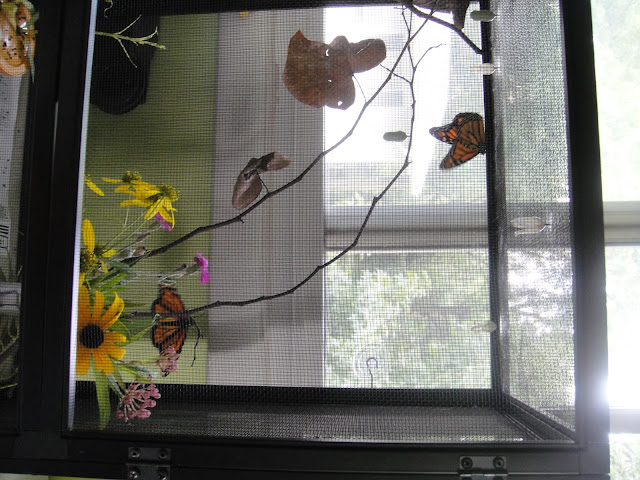 There they were! Both flapping, fluttering around, seeming very ready to go!

And guess what?.... Charlie Murphy is a female!
They were alone in that cage all day, unsupervised... Charlie could be pregnant by now. My oh my. What will the media say when they find out Rick James has knocked up Charlie Murphy???

I transferred them both into the transportation plastic container and the three of us went outside. 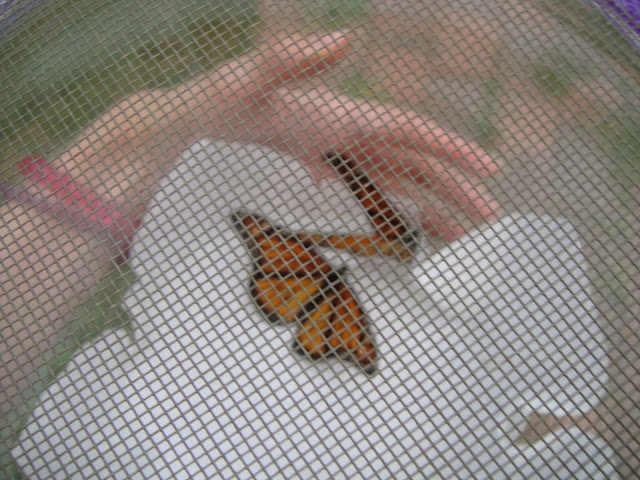 And out to the milkweed we went.
I placed Rick James on a flower... and he did the same thing as yesterday: Just sat there. 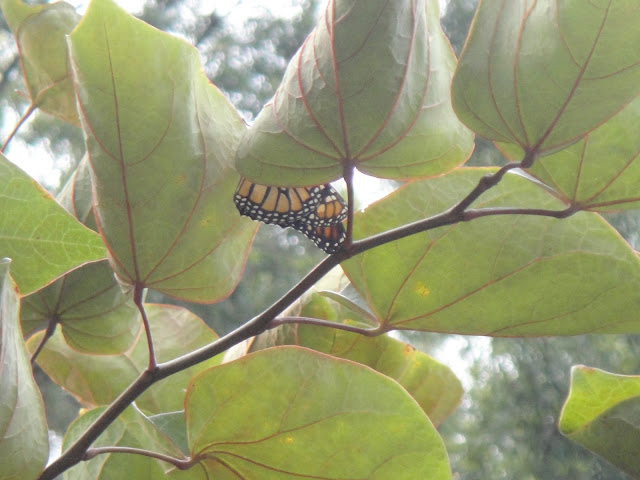 I was a little sad that she didn't want to sip some nectar with Rick James before she left.

I was also concerned that Rick James still hadn't made any attempt whatsoever to fly.
I held my finger out to him and he climbed on. I walked him over to Charlie Murphy and he just sat there. Then he peed on my hand. I walked him around some more, hoping to let him feel the breeze? Look around? See something he liked? I don't know.

Eventually I placed him back on the milkweed and went inside to wash my hand.

When I came back out, he was still there on the milkweed. I figured I'd give it one last go to try and get him airborne and gently moved my finger underneath him.... and he immediately took off, up, over and past a neighbor's house, far away into the woods!
I was kind of sad I didn't get to have one last look at him roosting in a tree, like I did with Eddie and Charlie. I was also kind of sad that he didn't fly into the Redbud to join Charlie again.
I went to the Redbud to check on Charlie... and she was gone.

They could have both gone their separate ways, but who knows... maybe she flew off to a tree behind the neighbor's house and Rick James went to join her.

Posted by Samantha at Pollinator Plates at 1:23 AM