This morning (day 5!) when I got up, I went to check on the caterpillars... 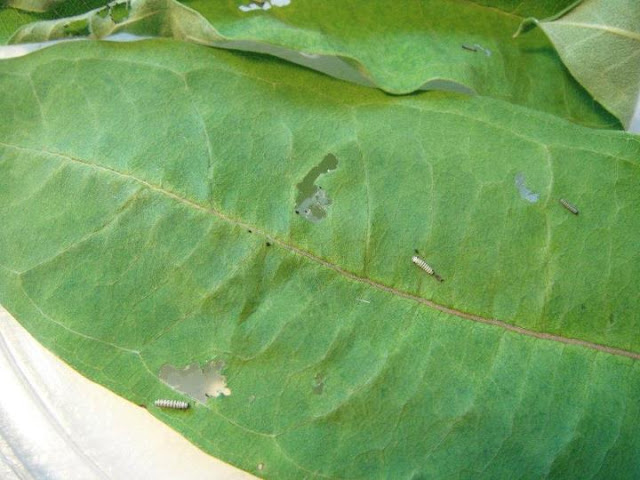 They insist on staying on the old leaves, even though I have given them fresh ones- and those old leaves are starting to curl up, which makes them hard to find.
But I counted a total of 8! (Only 5 are visible here.)
And I still have 3 eggs waiting to hatch, so I must have miscounted when I originally collected them.

I located Eddie Murphy, and saw something black on his face. My first thought was, "Aw, geeez, why is there poop on his face? Is he playing in it? Or did he just make so much of it that crawling through it was unavoidable?" He was squirming around, trying to get it off, and I realized that I wasn't seeing poop.

Anyway, check it out:


See the long, gray thing behind him? That's his skin. I had NO idea he would already be shedding his skin only 2 days into his short life!
So the black thing in front, which doesn't look like poop at all, is his head capsule.
And look! He has the teeniest, tiniest, little nubbly antennae! Awwwwwww!

This is all pretty new to me, but from what I understand, as the caterpillar grows and gets ready to shed his skin, the layer on top of its face gets hard and sort of pops off as one piece. So his face comes off like a helmet, and his skin comes off kinda like a jacket. Think of Chris Farley doing "Fat guy in a little coat."

Eddie Murphy is growing up so fast! He is already in his 2nd instar, along with Charlie Murphy and a 3rd caterpillar who doesn't yet have a name...

Then later I went to the post office to mail out a ton of promotional materials to some people who were kind enough to volunteer to display information about the license plates at some fairs and festivals through August and the fall. I checked the P.O. box while I was there, but alas- empty today! :(

Posted by Samantha at Pollinator Plates at 10:48 PM