This is a somewhat silly post I meant to write last week, but I'm glad I didn't since today there was something significant to add.

Two of my caterpillars, Charlie Murphy and Rick James, have been inseparable almost from birth. They were the 2nd and 3rd caterpillars born from about 12 eggs I collected 2 weekends ago.

I kept big (and a few small) leaves in the container to be sure everyone was well fed (I ended up with 7 or 8 baby caterpillars in all), and as the caterpillars grew bigger, I added enough leaves so that everyone could each have their own.

But for these two, the number of leaves was irrelevant. No matter how many leaves were in the container, or how much exploring they did of said leaves, they always ended up eating on the same one.
Eventually I put all of the little caterpillars into a bigger container- I was down to 6 of them at that point. I knew they would need more room as they got bigger. However, Charlie Murphy and Rick James- true to form- remained constantly close, even after being given more space.

This didn't always seem like a good thing though, because as with all siblings, sometimes there were fights:


Charlie Murphy is the bigger one- and it looks like he's telling Rick James that he needs some space! (I put a small leaf in between them after recording this... sometimes siblings just need to be separated for a bit.)

I had never seen caterpillars act like this before, and thought maybe I had the wrong impression of these two. Maybe they weren't best friends... but more like mutual bullies- rivals, even- who enjoy a good territorial battle and wouldn't leave each other alone no matter how many leaves I added.

But the fighting phase lasted only a short time. (Well, everything with caterpillars only lasts a short time, but that's beside the point.) As the caterpillars got older (and more mature), Charlie Murphy and Rick James' bond seemed to grow stronger.

Eventually I transferred the caterpillars into another new container- a big screened in cage. The new cage would give them plenty of air circulation and lots of climbing space to use when they decided to wander around in search of just the right space to form a chrysalis.

I added a shallow plastic dish with holes punched in the lid, filled the dish with water, and stuck big common milkweed leaves (and a couple small swamp milkweed branches) through the holes of the lid, hoping to keep them fresh for as long as possible. Once again, enough leaves for everyone.... I think this picture speaks for itself: 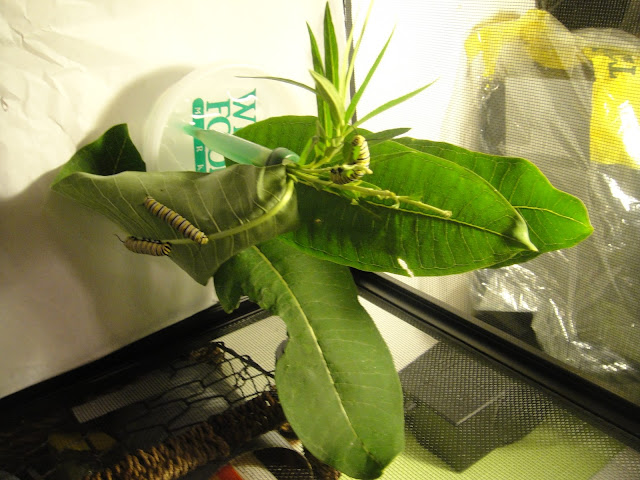 It reached a point where I no longer thought it was just my imagination.

Later this same day, I was working late in our home office, where the caterpillar cage is located- on the desk, next to the computer. I finished up with work around 1 in the morning and decided to peek over at the caterpillars to see what was going on. 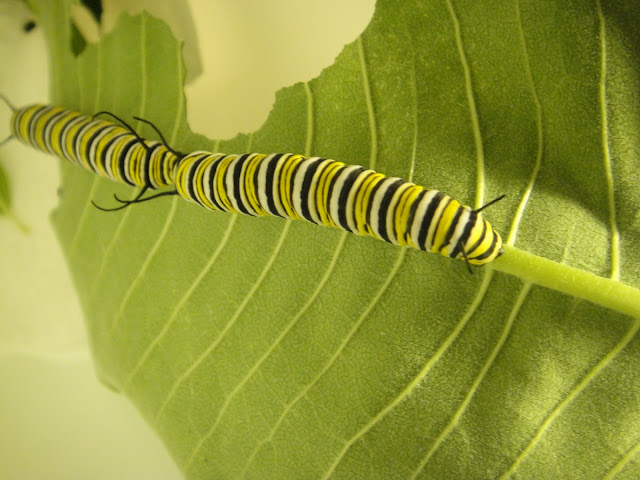 Oh no! Charlie Murphy and Rick James are surely about to fight again!
I watched them and waited, hoping I wouldn't have to intervene.
I waited...
And waited....
And... nothing.
They stayed in this position- not moving at all, and I realized they weren't going to fight. It seemed like they might have even been sleeping, they were so still.
It was sweet.

As you can probably tell from the above picture, the caterpillars are really huge now- about 2 inches long.

Yesterday I came home from running some errands. Eddie Murphy, the eldest caterpillar, had formed a chrysalis- which was very exciting! And Charlie Murphy and Rick James had both started wandering, climbing around, looking for a place to make their chrysalis as well.

I am amazed at how in tune the two of them are.
Even at this late, late stage in their lives, when it seems like the amount of time that it takes to do what they have left to do can vary greatly (9 hours? 15 hours? 20 hours?)- they both began to spin silk on the top of the cage at the same time. And- I can't make this up, I was sitting in the room with them when it happened- they both dropped down into their hanging "J" position within about 10 minutes of each other.

When I woke up this morning, I was anxious to see what Charlie and Rick had done during the night. Had they already shed their skins one last time? Would one be a chrysalis, the other still in a "J"?

When I walked in and saw them, my heart immediately sunk. For they were both hanging straight down, no longer in the "J" shape.

Last night, I had to dispose of a sick caterpillar I had had in isolation. (He was isolated because I had collected him at a later time than the others, and since he had spent more time outside, he had been more exposed to parasites, etc. I didn't want him infecting the others that I had collected almost immediately after seeing the eggs being laid outside.) He had gone into a "J" yesterday morning, but throughout the day he lost his "J" position and eventually hung straight down... That didn't seem right to me. Later that night came the tell-tale white string hanging from his body and I knew he had been infected with the Tachinid Fly. :(

So you can imagine my sadness to see these two, both hanging there, straight down.
But I got closer, and realized they were still green and swollen looking- not rust-colored and shrunken, like the infected caterpillar.

I took a look at them from another angle and couldn't believe what I was seeing- so, of course, I grabbed my camera.

This is the rest of the process. I decided to take video from a different angle. I apologize in advance for all of the movement in the middle of this video- I could tell my camera lost focus and I was moving around, trying to get it to re-focus on the pupating caterpillar in the foreground.


I feel like I was witnessing one of those old Disney movies, where it's created from actual films of animals rather than animation. "Charlie Murphy and Rick James: A Tale of Friendship, Eating, and Pooping."

Of course, I'm curious to see if the two eclose (emerge) as simultaneously as this. Only time will tell- and I've got about 10 days of waiting until I find out :)

Posted by Samantha at Pollinator Plates at 12:09 PM