A new butterfly, a flail, a release.

Yesterday was quite an exciting day. Almost a tragic day, but had a happy ending.

I was in Norfolk this past weekend for a National Honeybee Day event at Norfolk Botanical Garden. I had left the butterfly chrysalises and new caterpillars with my husband for the weekend. I figured the chrysalises would just sit there, and the tiny caterpillars might need more food, if anything, but I left them with plenty.

I got home around 7 last night when my husband was in the middle of his Insanity workout. I went to say hello to him and he said, very excitedly, "I have some good news for you!"
My real guess was that the caterpillars upstairs were still doing well and that all were healthy, but I guessed a couple of joke-guesses first.
Then the real news surprised me.... he said "You have a butterfly upstairs!"

"No, I heard him flapping around in there."

I dropped my things on the table and rushed upstairs. Sure enough, there he was, crawling all around the ceiling of the screened cage! 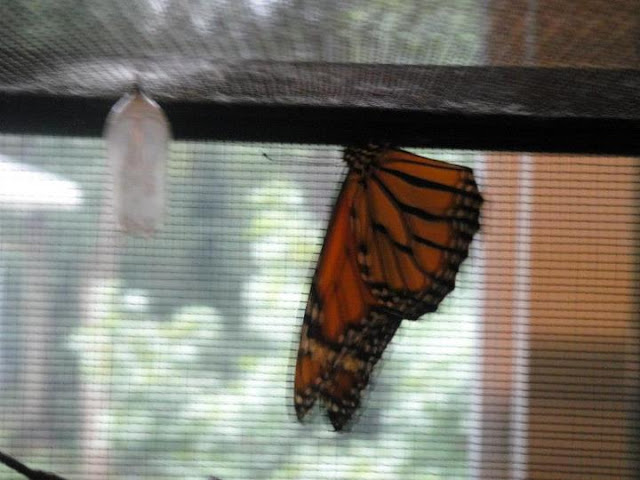 Now, looking back... it was evening and had the possibility of raining later in the night, so it would have probably been fine- better, even?- to just grab some flowers from outside and bring them in to feed him for the night, then release him the next day.
Anyway.

I took the plants and caterpillars out of their big plastic container, thinking I would use that container to transport Eddie Murphy from the screened cage, through our house, and out to the great outdoors.
Simple, right?

I put a stick into the cage, thinking he would climb on, but he didn't.
Of course. Because what would appeal to him about a stick?
I went out and got a Black Eyed Susan from the garden, then brought that in... again, thinking- of course, he would climb right on and I'd put him and the flower into the container.
Eventually- after I cornered him and basically forced him to- he did climb onto the flower.

Gently, ever so gently, I pulled the flower from the cage.

As I carefully placed the flower into the new container, he suddenly fluttered right up and landed a windowsill!

My response was to yell at him as I made my way over to him. "Eddie Murphy! Of all the places-- there are probably spider webs and everything there-  if you get caught in one--"

But I no longer had to worry about that, as he fluttered his way over, down, and onto the edge of the desk,
and then
landed
on the floor
right
behind
a
SHELF.

"ARE YOU KIDDING ME!!!! This is so typical! This would only happen to me."

I helplessly listened to him flapping around back there, certain that he was tearing up his brand new butterfly wings, envisioning him unable to fully enjoy his new butterfly life. How sad.

My husband immediately went to work, pulling things out of the way so we could get to the bottom of the shelf and move the whole thing out away from the wall. I helped him, meanwhile hoping Eddie would make his way to a place where I could easily reach him.

Instead of trying to give him a little flower to climb on, I offered my finger. He climbed on right away and I was able to easily get him into the container.

You're probably wondering why I didn't just take the entire screened cage outside and open it and release him that way? I've been trying to disturb the cage as little as possible so as not to accidentally bump the other chrysalises around too much.
Lesson learned.

We took Eddie outside and over to a milkweed plant, but he wouldn't leave the plastic container. I reached in and without hesitation, he climbed back onto my finger. I placed my hand on the plant, and he immediately began sipping from the flowers.
That was a very exciting thing to see. 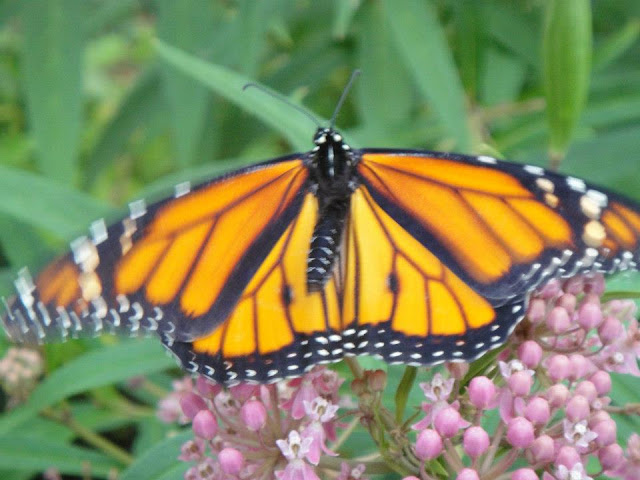 I mean, he looked perfectly healthy, but sooooo many things can go wrong with these guys. Parasites, sickness, all kinds of weird things that will cause abnormalities such as a deformed proboscis. We still had to wait a bit to see if his wings were going to work properly, after all that flailing around in the house- I was nervous and unsure.

After about 10 minutes of nectaring, Eddie took his first flight! Great success!

He went right up into this tree.
I'm not sure how long he stayed there. I'm sure by now he's on his way south- either to Mexico, or to become a parent of a butterfly who will go to Mexico. I did hear it rain last night, and was a little worried about him... I hope where ever he is, he's doing ok :)

Posted by Samantha at Pollinator Plates at 1:44 PM